Bon Jovi are back, and they're heading to Joe Louis Arena on Wednesday 29th March 2017 for a night of epic rock! The iconic band will embark on their This House Is Not For Sale Tour, promoting their hotly anticipated album of the same name! This is the first extended tour run for the international superstars since 2013 and it's going to be monumental! 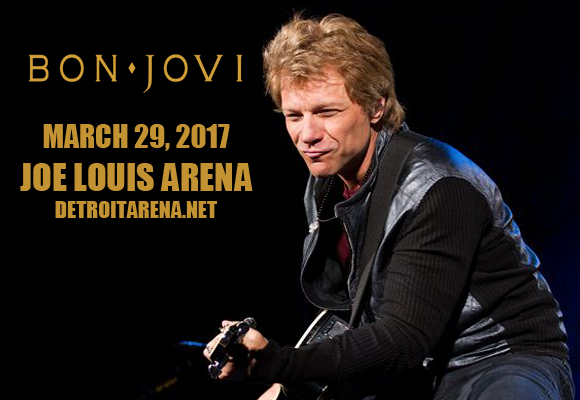 Bon Jovi is an American rock band, consisting of lead singer and namesake Jon Bon Jovi (born John Francis Bongiovi, Jr.), pianist and keyboardist David Bryan, drummer Tico Torres, lead guitarist Phil X, and bassist Hugh McDonald. Formed in Sayreville, New Jersey, in 1983, the band rose to fame with their third studio album, 1986's Slippery When Wet. Thier fourth studio album, New Jersey, was also a commercial and critical success, holding its place at the top of the charts. Bon Jovi was inducted into the UK Music Hall of Fame in 2006, and the band received the Award of Merit at the American Music Awards in 2004. Jon Bon Jovi and the band's longtime guitarist and co-songwriter Richie Sambora were inducted into Songwriters Hall of Fame in 2009. Sambora left the band to pursue other musical directions in 2013. Bon Jovi has released 13 studio albums, plus two compilations and two live albums to date.

Sign up for our newsletter and get $5 off your first order!
You will also recieve a monthly “What’s On Guide” to your email!